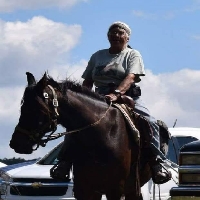 Ronald Reagan said there was nothing better for the inside of a man than the outside of a horse. Alice thought the same was true for women: she raised Morgan horses and rode well into her eighties. Her favorite day of the year was the Kentucky Derby. In her youth she was a real-life Annie Oakley, on her high school rifle team (Yeadon High School) and she worked on her marksmanship her whole life through. As a mom she was strict, but with nine kids she had to be. Some moms would say wait ‘til your father gets home; she dished out the punishment AND said wait ‘til your father gets home. But the result was quality children. And everyone was well fed; she joked that she baked a loaf of bread for each kid every day. And much of their other meals came out of her garden; actually, it was more of a field than a garden and everything was canned after harvesting. Alice was a voracious reader, preferring small chapters she could finish in a sitting, usually a couple hundred pages a day. Her favorite author was Louis L’Amour. She painted a bit; animals, barns and landscapes. And sculpted: Alice carved a horse head out of cherry logs and won 1st place and a scholarship to art school. But she found her real calling late in life in her role as a grandmother, passing on a lifetime of knowledge to the grands: she taught them how to farm and drive at young ages and took them to the fairs and the rodeos.

A memorial service will be held at a later date.