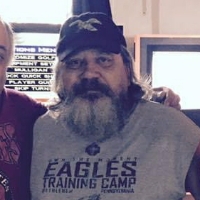 Benski was a husband, a son, a father, the oldest of 9 and a friend to many who will dearly miss him.  His 2nd home was the Beverly Athletic Club. Ben was fixture around the bar and he was president of it more than he wasn’t, and it was even his blood and sweat that helped build the current building. In his prime you could forget about beating him at the pool table; in later years he was ok with letting you win a game or two. Ben loved the Three Stooges, often sounding like Curly; sometimes even in his sleep. He was a classic rock guy and had drummed in a band in his youth. Perhaps that’s where his long hair originated, but it’s generally accepted that he was a biker without the bike. And he loved his collections: baseball cards, football cards and all kinds of memorabilia. Ben rooted for all the Philly teams especially the Phils and the Eagles and was a Civil War buff. He had a standing date with his wife every evening: Jeopardy at 7. Ben’s earlier years were found working in technology: he retired from Lockheed Martin. He served our nation in the Army and won many a bet during the annual Army Navy game.
He’d meet a pretty girl named Barbara one evening at the Post Road Tavern. They’d share a 44-year marriage. He is survived by his son, Ben IV; and his step-children, Linda (Scott) Harrison and Frank (Caren) Rago.
Come celebrate69 great years and have a drink or two at the Beverly A.C. Club, 725 Broad Street, Beverly, 11 a.m. to 3 p.m., Saturday February 27.