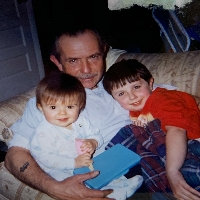 The closer he was to the river the more he felt like himself. Whether with a rod in hand angling for some catfish or just watching the boats go by it was definitely Gary’s favorite place. He even had an app on his phone to monitor the waterway from his couch. And he had the greatest view of it all day long from his perch atop the Burlington Bristol Bridge: he was responsible for raising it for passing ships. He loved the sounds of Led Zeppelin, Pink Floyd, Aerosmith and most importantly KYW news radio. Gary was a weather Junky: no need for Cecily Tynan in their home; Gary knew the weather down to the minute. But his real calling was as a dad; he loved tossing the football around and shooting some hoops in the driveway. He was a lifelong Steelers fan and cheered for Jeff Gordon but he loved Wawa even more: a cup of their coffee and a little water.
He’d pop in to a local 711 when he heard there was a pretty girl working there. He and Margie would share a 27-year marriage. He is survived by his children, Charles John, Gary Richard Jr. (Kait Seip) and Jason (Jenn); his grandsons, Jack and Dominic, and, most importantly, his granddog, Ace.
Come celebrate 68 great years Thursday 6-8 p.m. and Friday 10-11 a.m. at Sweeney Funeral Home, Riverside where there will be an 11 a.m. service.