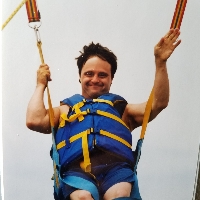 There were two things that transported him straight to cloud nine: food and Elvis. At restaurants he’d exclaim every dish his favorite. Play some Jailhouse Rock and Gary would flash his trademark smile. He flirted with the ladies and loved to get them out on the dance floor; watch out if YMCA was playing. And he’d get Western at the Cowtown Rodeo; no one looked more at ease in a 10 gallon hat, flirting with the cowgirls. Gary was always up for a party, especially New Year’s Eve in Margate. He was an Eagle Scout and cheered for the Eagles; he’d shout at the T.V in his living room but they could hear him at the Linc. If the Birds weren’t on he’d be checking out some old shows, Lawrence Welk or wrestling: huge Hulk Hogan fan. Some said it was difficult to change his mind. Those closest to him knew he was stubborn, but, either way, his mistakes would make you chuckle. He worked for occupational training for 30 years. In his retirement he did a little travelling: Branson Missouri, Dollywood and of course the home of the King: Memphis.

He is survived by his brother: Scott (Constance); nephew: Richard (Heidi) Lewoc; cousins: the Schneider and Matowski families. He was predeceased by his nephew Ian Lewoc.

Come celebrate 65 years on Saturday 11 am-12 pm at Sweeney Funeral Home, where there will be a noon service. Interment Lakeview Memorial Park, Cinna. In lieu of flowers donations may be made to the Special Olympics. Zoom Meeting ID: 873 2453 6030 Passcode: 785367