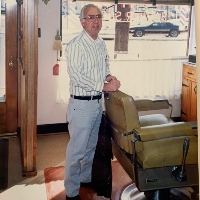 He followed his father’s footsteps by going to Barber school in 1958 then later bought his first shop in the 60s on St Mihiel Dr. He’d cut your hair and fill you in on all the current events: Tony was like living, breathing newspaper. He was the life of the party, in and out of his shop; a larger than life personality. Tony never missed a day of work and refused to take a vacation. His work ethic lasted his whole life through: younger years found him working as a mason. Tony loved cars and everything to do with them: old Mercs, 50 Ford, drag racing, boat racing, motorcycle racing. And his car was the cleanest. But his real calling was as a dad and provider for his family. If his T.V was on he’d be checking out some Columbo or Nascar, especially if Earnhardt was in the lead. But, perhaps his most relaxing times were with his friends, Bill Cammistan, Boxy, Bill Mortland, Tom Sickler, and Jack Fenimore who was his guinea pig while he was in barber school.
He met a pretty girl, Mary, on a blind date. They’d share a 60 year marriage blessed with two sons: Joseph (Joann) and Mike; grandchildren: Brianna, Kaytlynn, Michael, Michelle, Rachael, and Anthony; and a great-grandson Colton; Tony is survived by his siblings: Grace (Harry) Craythorn, Marie (Paul) Medici, and Joe (Kathy); Tony was predeceased by his parents: Louis and Pauline; brother in law, Jimmy Grannet and sister in law, Nancy Perry.
Come celebrate 83 years on Saturday 10am-12pm at Sweeney Funeral Home, Riverside, where there will be a noon service.